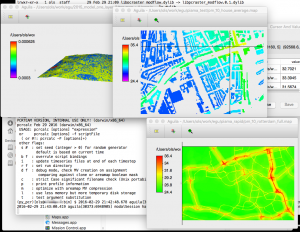 Until now, we provided Linux versions of the PCRaster software conforming to the Linux Standard Base (LSB). This approach is convenient for users as our executables will run on virtually any Linux distribution. For us developers, however, building LSB software is quite tedious. We were forced to use specific (outdated) compiler versions and we needed to compile and distribute a lot (about 25) of third party libraries ourselves. In addition, the LSB is rather conservative with respect to supporting new compiler versions, therefore not enabling us to use new and very useful features of the C++ programming language. However, we need those new C++ features for our current projects. As PCRaster is open-source for quite some time now there is also no reason to distribute binaries any longer. We will instead focus on improving and extending our software and on distributing the code. We changed our whole build infrastructure to use more libraries installed on the system, and further try to reduce the dependencies to third party libraries making it easier for us to develop and add new features. However, no longer providing binaries will require the Linux users to compile the PCRaster software themselves. Don’t fear; we will provide build scripts that smooth the compilation process.

We develop new software due to several research and development projects. Last summer we worked on a multicore module for the PCRaster point operations within the maps4society project. We continue our work on high performance computing elaborating distributed computing to further increase runtime performance of environmental models and parallel I/O. We are also busy with a new file format that is capable of handling heterogeneous data. These exciting projects result in new, volatile software rather than stable versions. But we are convinced that our developments are of interest and useful for adventurous modellers. However, previously it was very difficult to distribute those new software developments to our users. The new release will include an optional flag to build these experimental features such that modellers can benefit from our latest projects more easily.